1st Choice Health and Wellness specializes in treating patients experiencing pain resulting from a bulging disc or herniated disc (also referred to as a "slipped disc" or "ruptured disc.")

Our Louisville herniated disc doctors in New Albany focus on the underlying cause of your pain and relieving it through various natural, nonsurgical treatments.Bulging discs are common in both adults and seniors. Some of the symptoms of a bulging disc or a herniated disc include pain, numbness, and muscle weakness in the neck, arm, lower back, or leg. 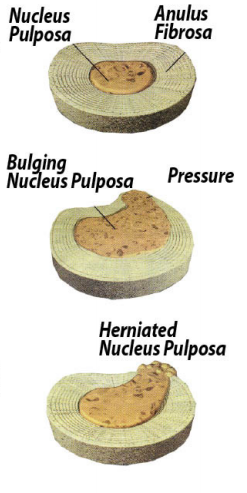 The discs of the spine receive their nourishment through blood vessels. Aging, normal wear and tear and trauma (damage) may cause a slow deterioration or degeneration of the discs of the spine. The more "stress" you put on the disc, the more you use up the nourishment, weakening and deteriorating the disc.
One of the amazing benefits of spinal decompression is that it can heighten the disc space, helping it function. The disc is the shock absorber that sits between two vertebras. It consists of a soft jelly-like material in the center called the nucleus pulposis and a firm outer band catted the annulus fibrosis. The annulus fi bros is acts like a rubber band which holds the disc together. As we age and use the disc, the nourishment is used and dries up which causes it to shrink or degenerate.

What is a Bulging Disc?

The Jelly-like substance is prone to injury and the most common situation causing problems is one that puts pressure on the disc. The pressure causes the Jelly material inside the disc to "bulge" or “slip” out of place.

As this occurs, the bulge itself puts pressure on other structures near the disc such as the nerves. This is how bulging discs cause pressure to build on the nerve.

What is a Herniated Disc?

Herniated discs (also often referred to as ruptured discs) often create confusion so let's make it clear. A disc can bulge without herniating. When the jelly-like nucleus pulposis is under pressure, it can bulge. But when the pressure is excessive, it may herniate (rupture) through tile outer band called the annulus annulus fibrosis. As the "herniated" disc material spills out, a portion can press on a nerve, causing pain and accompanying radiation and weakness of the muscles involved. The nerve may become '"pinched" resulting in the condition of sciatica, radiating pain to the buttocks and/or lower extremity (leg and calf).

At our New Albany chiropractic clinic, we use several therapies to treat a bulging disc or a herniated disc, including spinal decompression.

Our New Albany spinal decompression doctors use this type of therapy takes the pressure off the disc and nerves.

During treatment on our decompression therapy table, the disc heightens, the space opens up, pressure comes of the nerve and the herniated jelly material is drawn back into the disc. Decompression is an effective procedure for severe and chronic cases of bulging and herniated discs, degeneration, arthritis, stenosis and nerve pressure.

For over 30 years, our patients have experienced relief from pain associated with herniated discs or bulging disc.  If you have any questions regarding treatments or any other service at 1st Choice, call our Louisville herniated disc doctors at (812) 945-4500 to schedule an appointment!